Today I’m going to cover the controversial economic theory know as trickle-down economics. I can hear the yawns already so go top-up your coffees.

For macroeconomic theory there are two main schools of thoughts. First is demand-side economics, which was popularized by US economist John Maynard Keynes. This theory posits that economic growth is driven by stimulating demand for products and services. For example, if an economy is slowing/contracting the government should increase spending (i.e. demand), which can help stimulate the economy.

The second theory is supply-side economics, which argues that increased production drives economic growth (see chart below). To help increase production governments should promote a business friendly environment by cutting taxes and regulations. 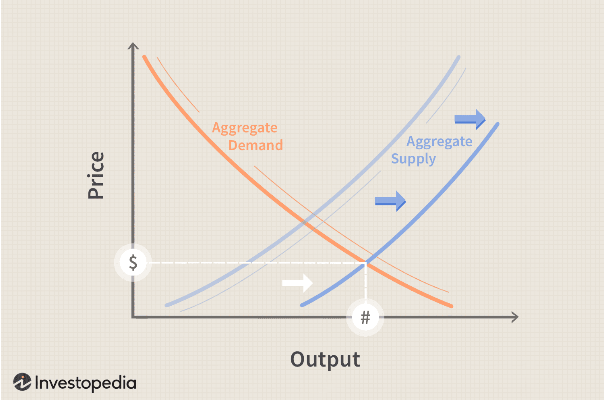 Trickle-down economics is a form of supply-side economics and supporters of this theory believe that targeted tax cuts for corporations and the wealthy will help to stimulate economic growth and ‘trickle down’ to the rest of society. This school of thought was advanced by Ronald Regan in the 80s, economists like Art Laffer, Bush II in the 2000s, and more recently by President Trump and the Republican party when they cut corporate and personal tax rates in 2018.

It’s my personal view that trickle-down economics is not very effective at stimulating long-term economic growth and, in fact, can have negative long-term consequences for an economy. Let me explain.

First, as is common with many economic theories, the theoretical premise of trickle-down economics doesn’t really work in real life, or the actual gains end up being far less than anticipated.

The father of trickle-down economics is economist Art Laffer. He believes that when taxes are high this provides a disincentive to work and make investments. Therefore, the government should lower taxes to stimulate the economy and that the stronger economic growth will result in higher government tax revenue thus the tax cuts ‘paying for themselves’. The problem with this is that it only works when tax rates are prohibitive (i.e. above 50%). Currently the highest marginal tax rate in the US is 37%, so given this, trickle-down economics is less effective than in say the 1930s when it was in the 60% range.

Let’s examine the most recent example of trickle-down economics – Trump’s tax cuts from 2018. President Trump, his economic council, and the Republican congress all said that by cutting the corporate tax rate that: 1) it will stimulate the economy so much that the US economy will grow 3-4%, and 2) the tax cuts will pay for themselves as a result of higher economic growth.

How did this pan out? Let’s review the chart of US GDP below.

The tax cut was implemented in Q1/18 and you can see there were a few decent quarters of growth following the tax cuts but this has since faded (last quarter growth was a lackluster 1.9% Q/Q). I calculated an average of quarterly GDP growth (blue line) to smooth out the trend and clearly growth has been decelerating since early 2018. Yes there are other factors at play that are weighing on the economy (e.g. Trump’s trade war) but, as you can see, the high growth predictions have fallen far short.

And we can do the same exercise looking back at Bush II tax cuts in 2000 and others and see the same effect. The net result is usually a short-term bounce in growth, but the targeted tax cuts often don’t have any long-lasting positive effect.

US Economy Has Slowed Since the Tax Cut in 2018 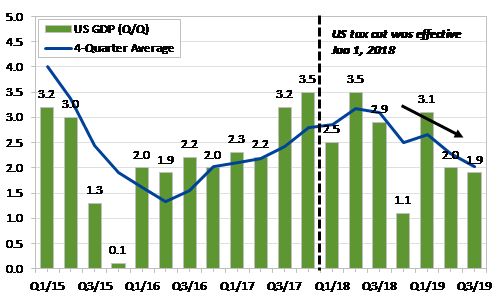 My second concern with trickle-down economics brings in another economic theory called ‘the marginal propensity to consume (MPC)’. Essentially, this theory tries to quantify how much people will spend if they receive higher income. The MPC tends to be higher for lower income levels, meaning that if a person earning $50,000/year receives a $1,000 bonus they are more likely to spend the $1,000 than someone earning say $200,000/year. Taken to the extreme how many yachts can Jeff Bezos buy if his tax rate is lowered? The MPC theory suggests lowering taxes on lower income levels will have a larger impact on the overall economy than cutting taxes on higher income earners.

Third, is the impact on government tax revenues and deficits. This is my big beef with trickle-down economics. Over and over again we hear ‘the tax cuts will pay for themselves’, however, the reality is far different. It’s real simple. Due to the lower tax rates and the lower-than-predicted economic growth rates, government tax revenues decline and deficits often spiral. This is exactly what we’re seeing in the US right now. The US deficit is going to hit US$1 trillion this year, and this is during a period of positive economic growth. Just imagine what it will look like during the next downturn.

US Deficit to Hit $1 Trillion This Year 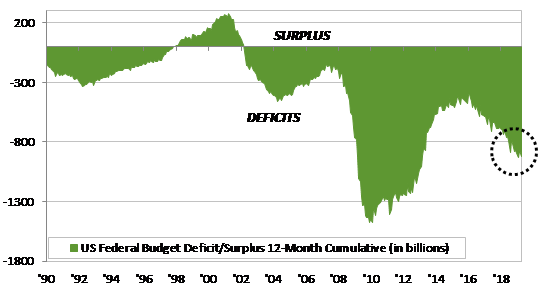 Finally, a strong argument could be made that trickle-down economics has contributed to the rising income inequality that we’ve seen over the last few decades. For example, the top 1% earners currently take home 21% of all income earned in the US versus 10% in the early 1980s. I believe this is contributing to much of the angst and polarization we are seeing in the US and the rise in populism.

So there you have it. I’ve laid out my concerns with trickle-down economics and why I’m not a proponent of this economic theory. Now to be clear, I’m not advocating we fleece the wealthy à la Senator Warren and recommending tax cuts just for lower income individuals. This is basically our PM’s current approach. Instead I believe that tax rates are too high for all Canadians, and that personal tax rates should be lowered across the board. For example, currently the highest marginal tax rate for Ontario residents is 53%, and like Art Laffer, I believe that when tax rates are this high it does provide a disincentive to working and investing. But where I diverge is that cutting tax rates just for the wealthy and corporations that it’s unlikely to ‘trickle down’ and lead to prosperity for everyone as they profess it will.