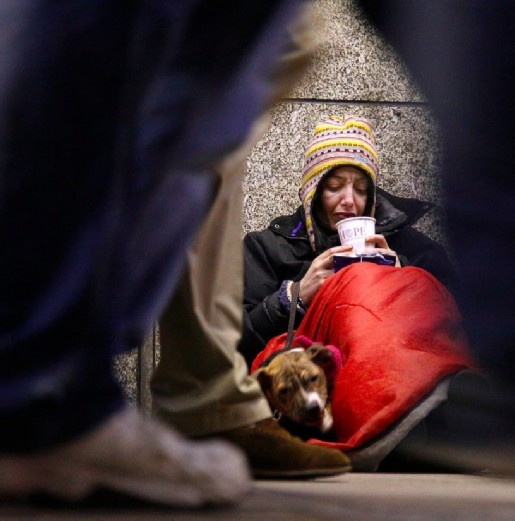 Some days ago Dominique Walker, 34, and Sameerah Karim, 41, and their kids broke into a three-bedroom suburban home in Oakland, California. Actually they moved in. Squatters.

The two have founded an ad hoc group called Moms for Housing. The goal is poetic and just, if illegal: “a collective of homeless and marginally housed mothers with the ultimate goal of reclaiming housing for the community from speculators and profiteers.” As Karim told a media conference, “Why should anyone—especially children—sleep on the street while perfectly good homes sit empty?”

The context: the property is owned by a company which buys distressed and foreclosed homes, repairs and flips them, or waits for market conditions to improve before selling. It’s a business. Greg Geiser runs the real estate investment outfit called Wedgewood.

Also for context: the average home in the area sells for about $925,000 (US) and the median income is $65,000. Like Vancouver or the GTA. Local rents are $2,500 for a one-bedder. Similar to Toronto or Van. Oakland real estate has been propelled higher in recent years by the massive proliferation of tech giants in the regions. One of the most expensive markets in America.

Needless to say, the Moms have support. There was a community march for the cause on the weekend. Unknown is if the women will be ejected. But it’s unlikely.

So what does this mean?

As you know, Vancouver now taxes homes the city thinks aren’t utilized enough. They don’t need to be empty or abandoned. Just vacant for a few months at a time. The province also taxes people with second places, even though all property taxes are paid. Toronto is actively considering the same ‘empty homes’ tax.

This month Vancouver expropriated two seedy downtown hotels owned by the Sahota family, occupied by low-income folks. The properties are worth millions. The city gave $1. The justification was the owners’ refusal to conform to municipal standards. The same politicians are changing zoning regs to allow four-storey rental apartment buildings to go up in hoods now devoted to single-family homes. The impact on local valuations could be significant. The justification: the market has not created enough low-cost or rental housing.

Do people have a right to housing, that government must respect? Are these actions therefore justified even when they penalize property owners or arbitrarily change rules? Should we expect more to come?

Here’s what the United Nations says: “The human right to adequate housing is more than just four walls and a roof. It is the right of every woman, man, youth and child to gain and sustain a safe and secure home and community in which to live in peace and dignity.”

That’s sweeping. The UN goes further still. All people have a right to “security of tenure” which means no forced eviction. The cost of housing should “not threaten or compromise” the ability to finance other aspects of life. Plus, housing must be well-located to jobs, healthcare and schools and include access to services and transportation.

Five months ago Canada signed onto this philosophy as the T2 government passed Bill C-97. It reads: “It is declared to be the housing policy of the Government of Canada to recognize that the right to adequate housing is a fundamental human right affirmed in international law; and to recognize that housing is essential to the inherent dignity and well-being of the person and to building sustainable and inclusive communities.”

It’s the first time in history our country has legally recognized an explicit right to housing. Canada is now one of the few places on the planet where politicians have done so. The implications are unknown, since it will be up to the courts to interpret and enforce this newly-minted right. But we know this: there are two new agencies being set up. The National Housing Council will advise on policy and the Federal Housing Advocate will delve into factors impacting housing conditions. The first report comes in four months.

Probably, given the political creep taking place, eroding the historic rights of property owners. From rent controls to empty-house taxes to expropriation and zoning bombs, the actions of governments are growing – a response to the big-city affordability crisis. The wealth gap’s obvious symbol is real estate. Now that every citizen has the right to affordable, convenient housing, expect a lot more activism. Look at the promises made in the last election campaign.

Ironically, politicians have rendered property harder to get and housing less affordable to own or rent. But they’re responding to the demands of a society which has glorified real estate and made its ownership into a cult. It’s a recipe for conflict. More tax. More intrusion.

So, Moms for Homes may be just Mr. Geiser’s problem now. Until it’s yours.