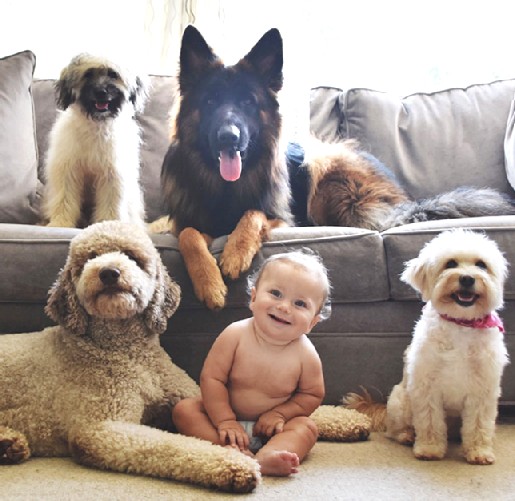 Two years ago blog dog Jeremy bought an ugly house in a North York hood where most of the houses are, well, ugly. He paid $855,000 for a pile of bricks on a 25-foot lot.

This week a virtually identical house, also ugly, came to market. Twenty-five feet of dirt, renovated but with a leaky skylight (says our guy), plus cracked basement and lopsided floors. The price was $949,000, considered to be slightly below-market and engineered by the listing agent to create a bidding war among FOMO’d desperados.

“Has the world gone crazy?!?” Jeremy asks. And we know the answer. It appears to be starting. All. Over. Again.

Last week we told you about the battle between FOMO (fear of missing out) and FOSC (fear of selling cheap). This has resulted in a serious paucity of listings. Homeowners are apparently vexed. (a) They understand they cannot sell their home, no matter how big the windfall, and buy a better one in the same city because of price escalation. (b) Tons of people own houses worth a lot of money but they lack the income to pass the stress test in order to finance another one. Trapped. And (c) it’s all about greed. If prices are going up, why not wait and sell for more later?

Listings have plunged. In Toronto, Montreal, Vancouver, Ottawa. Meanwhile Covid-19, that pesky little pecker of a virus, has upped bond prices and dropped yields. So mortgages are cheap again, just in time for rutting season. This has some people thinking Spring of ’20 is going to smell a lot like that of 2016. FoMo-20.

At least, so says RBC (which, coincidentally, sells mortgages). Here’s its latest report:

It’s looking more and more like early-2016 all over again for the Toronto housing market. This is not a good sign. Those were the days when things started to heat up uncomfortably, propelling property values sky-high in the ensuing year. January real estate board-level statistics show low inventories and further price acceleration… we could see the benchmark price (which rose at the annual rate of 8.7% in January, up from 7.3% in December) increase at a double-digit pace within the next couple of months if the market tightness persists. .. Worse, if supply shrinks even further, prices could spiral upward like they did in 2016 and earl 2017. The last thing the market needs right now is any policy move that would tighten things up even more—be it by restricting supply, or more importantly, by stimulating demand.

Hey, Chateau Bill and T2 – did you read that? Don’t goose demand, guys. No loosening up of the stress test. No new tax credit, moister-loving, newbie-buyer incentives. In fact, don’t even talk about it. And tear up that mandate letter from the PM to the Finance Department insisting mortgage rules be made “more dynamic.” Maybe ”more toxic” would be a better phrase.

Now, we know Toronto, southern Ontario, Montreal, Ottawa and places like London and Halifax are hot – low listings, bubbling demand and rising prices – but what about Vancouver, that socialist, tax-riddled paradise? Eitel Insights, the local property analyst guru, is forecasting average detached prices will sink further and soon take values back to 2015 levels, despite a big jump in January sales.

But the bank sees it differently, saying recent soft prices in Van are not because of a trend. Instead, it’s snow.

Weather was a big factor in January in Vancouver. Although the Real Estate Board of Greater Vancouver reported a significant 42% jump in home resales from a year ago, we figure activity fell materially (perhaps as much as 15% or 20%) from December on a seasonally-adjusted basis due to major snow storms that hit BC’s Lower Mainland region. So last month wasn’t a good read of the underlying trends, which we continue to view as strengthening. The benchmark price was still down (-1.2%) in January from a year ago but that’s about to change soon.

Wow. Sounds like the country’s biggest lender is blowing hard on the fire. Nothing like flames, conflagration, sparks and billowing smoke to fuel the FOMO. The result is 19 offers on a dodgy North York house fetching $400,000 over asking.

Of course all this adds to the steamingly monumental pile of debt we’ve accumulated. And it’s interesting the proportion of highly-indebted borrowers is exploding. That’s people with debt equal to at least 450% of what they earn. You know – the hip urbanites buying $900,000 houses for $1.34 million, who think they’re smart. Soon one in five borrowers will be in the club. 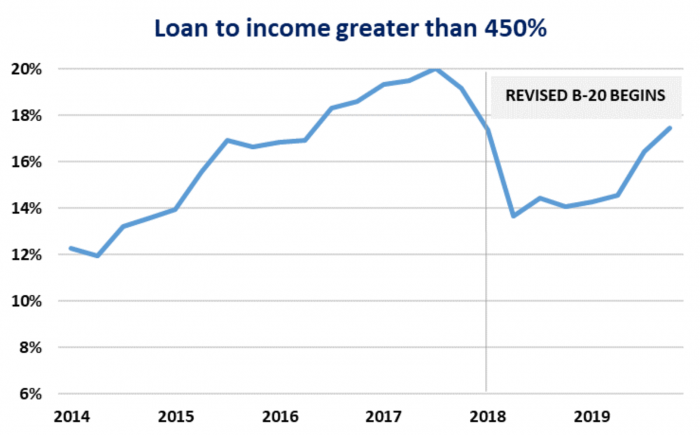 Remember way back to yesterday’s post on retirement realities? The more debt piled on, the greater the debt service charges, the less people have for savings and investing for future cash flow. At the end of the day we all need income more than a roof. Leveraging up residential real estate when markets are hot might feel genius, but a one-asset strategy is rife with risk. Only buy real estate when you can afford it.

When’s that? Come back tomorrow.