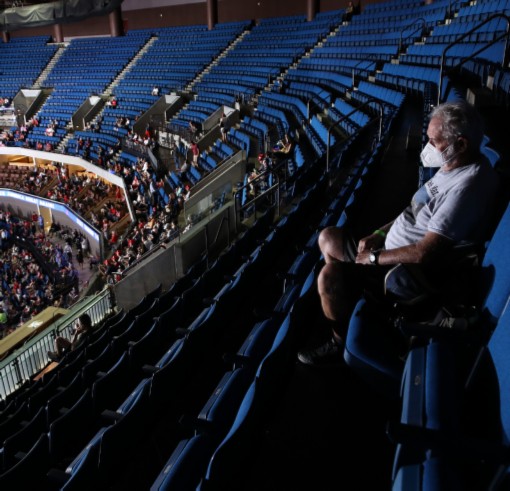 What a blog. My snappy portfolio manager buddy Ryan set you up for Trump’s pivotal Tulsa rally with his astute, research-based post yesterday. And today I will clean up the damage.

Not from Mr. R, of course, but Mr. T. What an awesome mess the 45th president of the United States has left in the wake of his Oklahoma excursion, and it’ll be interesting to see how financial markets react over the coming days and weeks.

First, the hype. The Trump campaign, the man himself and lots of his parrots and cockatoos on this site chirped about one million people having requested tickets for a mass rally of historic proportions. Well, didn’t happen. About ten thousand showed up. That’s a mess of people, for sure, but it left half the seats empty and amounts to 1% of one million. There was no overflow outside, when the campaign had suggested perhaps 40,000 might clog the streets. So a speech by Trump in that location was scrapped. The elaborate outdoor stage was dismantled. And claims that MAGA fans had been turned back by protestors was showed, live on TV, to be false.

In short, a disaster. One of the biggest fails in modern campaign history. The base did not rally. No flocks of new supporters. A sea of vacant blue seats.

Turns out hundreds of thousands of tickets were reserved by TikTok dancing kiddies and K-poppers doing mischief. Imagine, using the Internet for political reasons. Like Trump on Twitter (‘Hillary is a criminal!’, “Joe has dementia!”). The real worry for Republicans is (a) how the most sophisticated and data-oriented campaign ever didn’t pick this up and (b) why Trump and others fell for and promoted it – a million attendees in the middle of a pandemic. Duh.

Second, Covid. Truly scary, since Oklahoma has recently seen a spike in cases and public health officials warned against a rally, complete with a Presidential mosh pit. In fact, this was the largest mass gathering on the planet since the pandemic arrived – which so far has infected almost 9 million and  killed 467,000, a quarter of them in the US alone.

Most people did not wear masks. Maybe 10%. During his speech Trump said he’d asked officials to “slow down testing’ for the virus because too many new cases were being discovered, making him look bad. And yet every public health official everywhere has said without testing the virus spreads undetected and cannot be halted. Less testing, more deaths.

In fact, pre-rally we learned six Trump campaign staffers have Covid. They were removed, of course, and it was reported today 45 was livid this news had been allowed to leak.

On stage he called the virus ‘Kung Flu’, a racially-charged epithet. Coming amidst the mass protests against racism on three continents, this was a shocker. While the president likely thought he was just dumping on China (again), this is not what Americans of Asian heritage (23 million) want to hear. More polarization, blame, discrimination and hate in US society. Not what you expect from the boss.

Today Trump has more to worry about than he did Saturday afternoon. His campaign let him down. He looks weaker, less relevant. John Bolton’s tell-all will be published Tuesday. Tulsa suggests there’s no silent majority, but a reckless minority. And no amount of inflamed rhetoric or oratorical passion can chase off the demons the president faces.

Forty million Americans are out of work, as the jobless toll swelled from an historic low to Depression-era levels. Public finances have been creamed as Washington spends trillions to stave off decline. Economic growth has turned into a GDP crater. It’ll take years to climb out of the hole. Half of Americans are still terrified of Covid and say they’re not ready to go back to work, fly or eat out. Finally, hundreds of thousands of people of all backgrounds, ages and races have been in the streets since the death of George Floyd in a movement the guy in charge does not acknowledge.

Whatever your leaning – right or left, con or lib, GOP or Dem – facts are facts. Trump narrows his base of support daily in mishandling these pivotal challenges. Tulsa was meant to be a symbol of renewal and rebuilding. Now it suggests naivety and ego. He looks remote, out of touch. More extreme. Every time he calls his opponents a ‘mob,’ he drifts further from the mainstream of voters, who worry more about their health, their jobs, their families. Joe Biden may be ancient and a tad creepy, but he’s no rad.