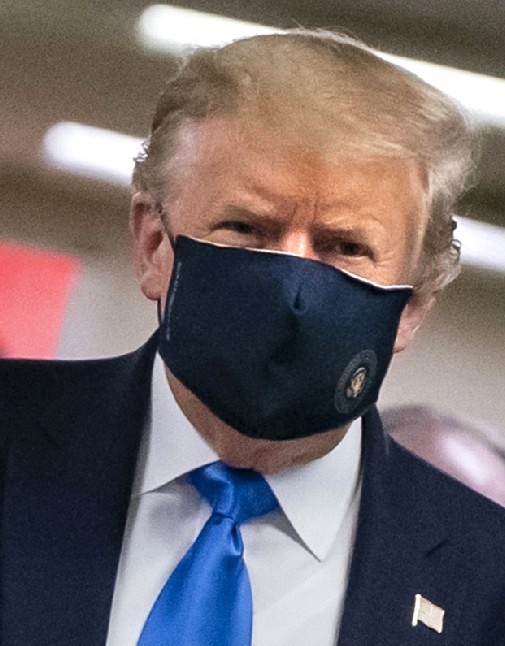 Some of you may be wondering how the heck have the markets recovered so strongly and the S&P 500 recently making a new all-time high, when the US/global economy is still mired in the worst economic downturn in decades. Well the answer is actually quite simple – the unprecedented government stimulus that has been injected into the system and that the US/global economy looks to have bottomed and is slowly turning around.

I’ve been very fortunate over my career to have worked with and been mentored by a number of brilliant and experienced investment professionals. One of those was our old Chief US Investment Strategist out of St Petersburg, FL, Jeff Sault, who not only is an interesting and entertaining guy (I did a road show with him across Canada and boy do I have some good stories from that trip!), but is also a market genius and someone I learned a lot from.

One particular piece of market wisdom was, “Ryan, markets don’t care whether the economy is good or bad, they care whether things are getting better or worse”. Meaning it’s not about the actual number (i.e., the US unemployment rate is at 10%), it’s whether the unemployment rate is moving from 10% to 9%. In the business we call this “second derivative” change and as I’ll cover today, the US economy is rebounding, which in part explains why the markets have recovered so strongly in recent months.

As Covid-19 worsened and morphed into a global pandemic, the global economy was brought to its knees as governments around the world enforced unprecedented lockdown measures to help contain the breakout. As a consequence millions of people lost their jobs, whole industries have been rocked and we’re stuck in the deepest economic downturn in many decades. But, the worst looks to be behind us.

In recent months we’ve seen a sharp rebound in major components of the US economy. For example, the US housing market is roaring back with housing starts rising by 22% M/M in July, housing sentiment among builders is at the highest level in years, and new home sales up 14% M/M in the latest report.

Manufacturing is also on the mend with the ISM manufacturing index jumping to 54.2 in July, now indicating expansion in the US manufacturing sector. Some of this is being driven by the US auto sector, which saw monthly production surge from just 1,800 units in April to over 140,000 in June.

While important areas like the travel and leisure industry continue to feel a lot of pain, other key areas like housing, manufacturing and retail sales are showing real strength, suggesting to us, the worst may be behind us.

US Housing and Manufacturing Are Surging Back 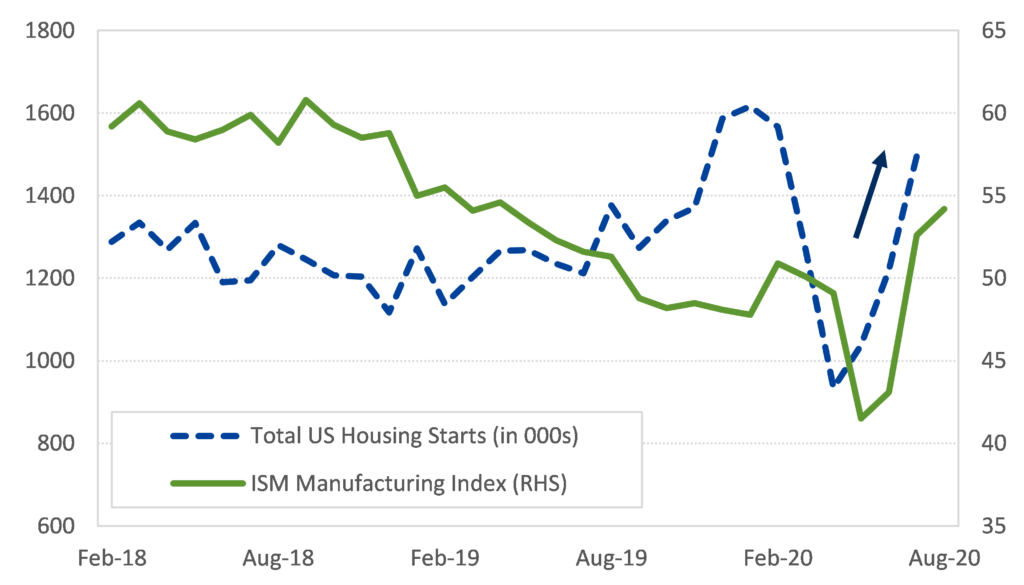 All of this is then being reflected in the GDP data. In the second quarter we saw the US economy contract by an unprecedented 33% Q/Q annualized. To put this print into context, my data goes back to 1950 and the next worse quarterly GDP figure was -10% in Q1 of 1958. This number is borderline apocalyptic and illustrates just how much the US economy has been impacted by this pandemic.

But I believe that Q2 may represent the low in this downturn, and see the US economy returning to growth in the third quarter. Currently consensus estimates point to a 20% rebound in Q3 and 6% growth for Q4.

The recovery is not going to be perfect and there will be setbacks along the way, but based on what I’m seeing in the current economic data, and my expectations going forward, I believe we’ve hit the low in this economic downturn.

US Economy Is Expected to Return to Growth in Q3 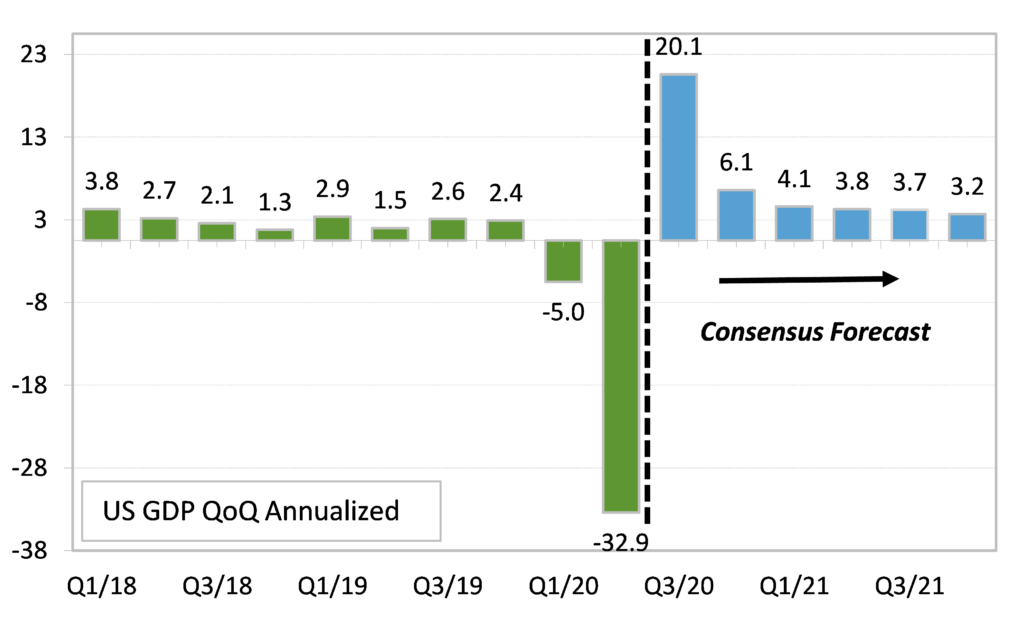 While I’m optimistic for a return to growth in the coming quarters there remain a number challenges to the global economy that could imperil the recovery. As I’ve been telling clients in our market updates I see three key risks to our outlook:

First, and stating the obvious is the next phase of this virus. As the global economy reopens and we begin interacting more closely and freguently with eachother, it’s only logical that we could see a ramp up of infection rates. The virus is no less contagious today and with us heading into the flu season, this fall/winter could prove to be a difficult time. If we were to see a massive increase in Covid infection rates and deaths, this could cause government officials to slowdown reopening measures, hampering the recovery and our call for a return to growth. Our base case view is we just work through the increases in rates, as the economic toll is just too grave.

Second are all the bankrupties that are likey to occur. J Crew, Chesapeake Energy, and Hertz to name just a few that have filed for Chapter 7 and many more are expected to do the same in the months ahead. Edward Altman, an expert on corporate bankruptcy, sees bankrucptices from this downturn eclipsing that seen durign the financial crsis. And it is estimated that 30-50% of all restuarants and bars could go under as a result of this pandemic. That will mean a lot of lost jobs and income for millions of people.

Lastly, I believe more government assistance is likely needed in the US as the employment insurance $600 top-up has expired and many Americans have already blow through their one-time $1,200 government payment.

Below is a chart of US personal income, which includes all the wages and salaries, investment income and government benefits that Americans receive in total. Note the dip, then surge in income as the US government dolled out billions of financial assistance for millions who were let go from their jobs. Without this, consumer spending would have collapsed and the US economy would have been even harder hit than the -33% contraction. Now much of this assistance has rolled off as the two parties were unable to reach an agreement on a second stimulus plan. Without another round of support this could signficantly weigh on consumer spending and the recovery in the coming quarters.

While there are clear risks to the economy and markets, as there always is, I see more pluses than minuses and see the US economy slowly recovering in the coming quarters.

US Income Has Been Supported by Government Assistance 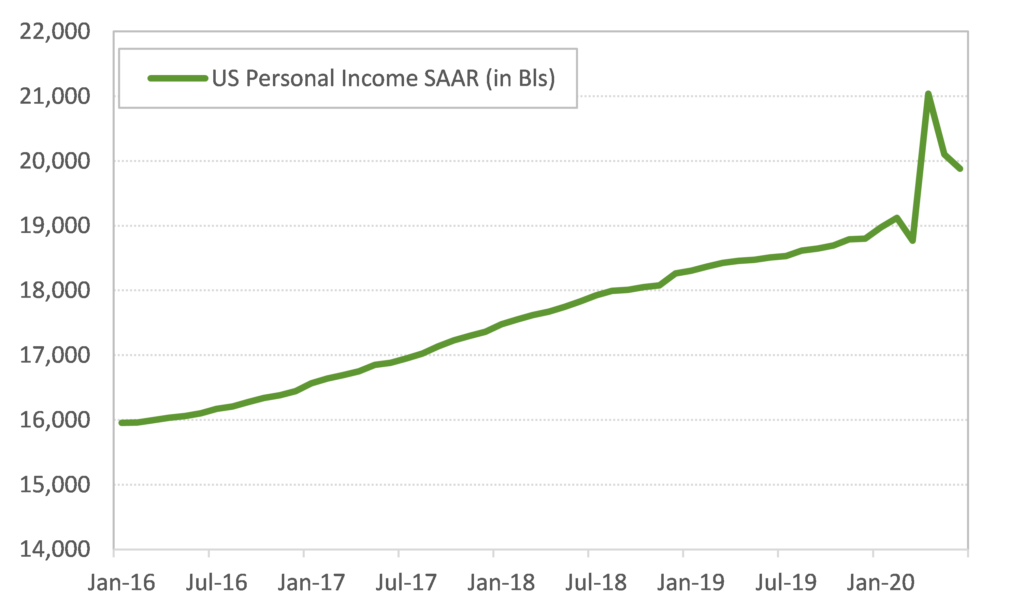