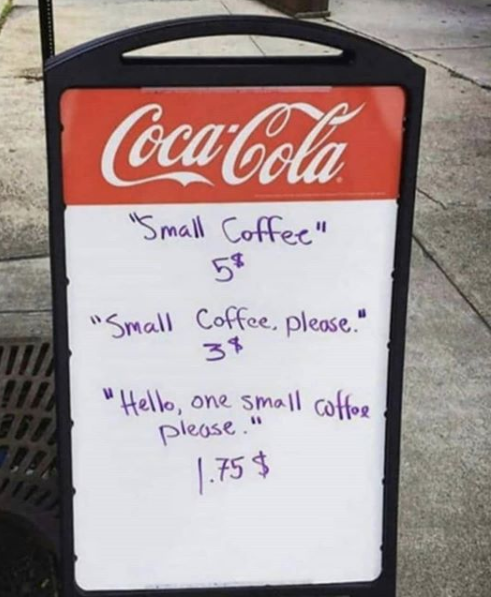 Given the social and economic dumpster fire that has been 2020, I take glimmers of hope where I can find them.

As a portfolio manager, I naturally focus on a long list of fundamental factors that may drive equity markets—corporate revenue and profit outlook, balance sheet strength, valuations, government and central bank stimulus, interest rate policy and, particular to this year, the progress (or lack thereof) in containing Covid-19.

But sometimes a part of my outlook is determined simply by a few strong trading days or—even better—a few strong months, particularly if they occur in the midst of a market crisis. Is such nascent positive momentum a certain predictor of future market success? Of course not. But it’s certainly worth considering.

History has shown that an unusually strong quarter, or even several unusually strong trading days, signals a shift in market sentiment, which often sparks an extended rally. Let’s start first with what a few really good market days could be telegraphing.

The table below shows the 15 best single-day returns for the S&P 500 Index since 1960 and its subsequent price performance over ensuing short- and long-term periods. Note that these good days usually occur close to the heart of a market crisis and the subsequent index price movement over future time periods is virtually always positive. The takeaway is obvious: strong market days have something very clear to say about shifts in market attitude and where markets may head in the future. Thus far in 2020, there have been five trading days that would have made this list, including two days in March where the S&P 500 had one-day gains of greater than 9%. 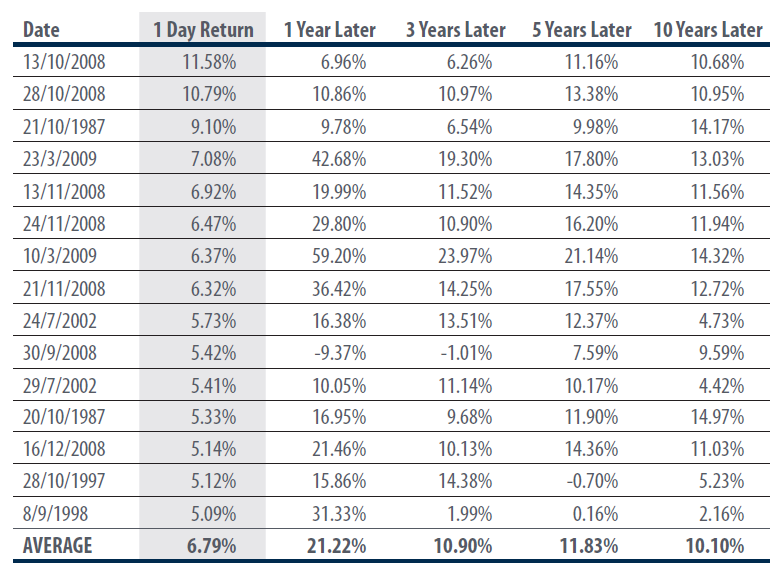 Now, let’s shift focus to quarterly returns. As we know, the second quarter of this year was a scorcher with the S&P 500 gaining a whopping 20%, making it the fourth-best quarter for the index since 1950. What might this strong quarterly return suggest about what comes next?

According to SunTrust Advisory, following the top 10 quarters since 1950, the S&P 500 has climbed EVERY time in the next quarter with an average gain of 8%. For those who have been paying attention to market performance thus far in July and August, this perfect record looks set to continue. And with respect to S&P 500 performance one year after a blow-out quarter? The S&P 500 was higher one year later after nine of these 10 best quarters with an average gain of 15% and a median gain of 17%.

Of course, markets never track the past exactly and risks abound. But the early momentum we’ve seen since March is encouraging. As noted investor Gil Penchina once explained it: “momentum begets momentum, and the best way to start is to start.”

So we’ve started. And I believe that markets are far from finished.

And finally, examining the actual fundamentals in detail will be a subject of a future blog, but I’ll leave you with this chart. Needless to say, the massive amount of global stimulus and its divergence with financial asset prices supports our bullish outlook into next year: 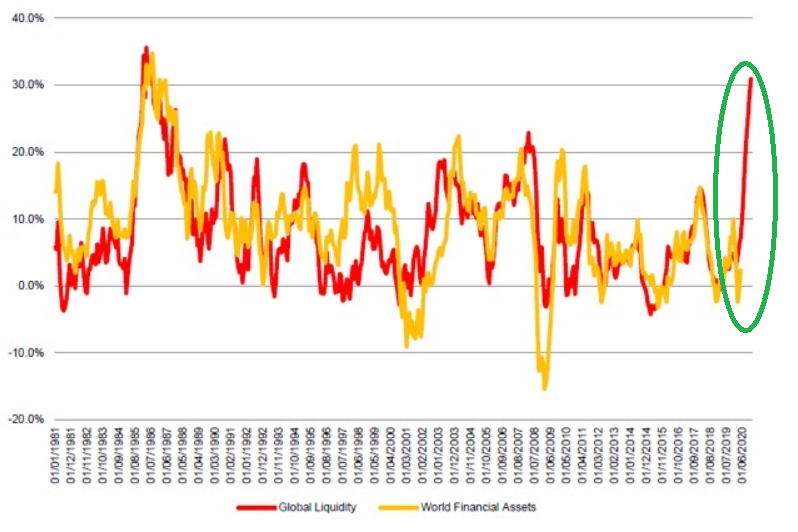 Source: CrossBorder Capital; liquidity is defined as all cash and credit available to financial markets including liquidity provided by central bankers.

And finally (for real), it’s that time of year again when hurricanes get the continuous nightly-news treatment. While no one would argue the damaging and often deadly consequences of hurricanes, what I’ve always questioned is the disproportionate amount of attention that they receive in the financial media. Every year, this kind of imagery gets plastered across the business newsfeeds: 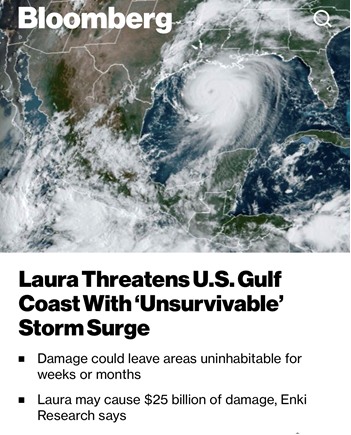 However, as I point out every year, the actual consequences of hurricanes to markets are negligible. Fear always generates viewership, but keep the below table in mind when the frightening hurricane newsflow continues over the next few months: