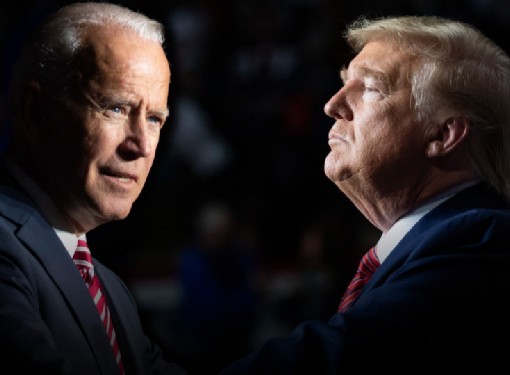 While it’s often said during elections that, “this is the most important election in years”, I think it’s fair to say that this really is one of the most important votes in recent memory. The US is the most divided it has been in as I long as I can remember over critical issues like Covid-19, the direction of the US economy, racial tensions, climate change, the Supreme Court and so much more, which are all on the table come November 3rd. And of course we have the potential (probable?) outcome of a contested US election by Trump if he doesn’t win. No wonder I’ve doubled up on my consumption of antacid pills!

So much has changed in just a few months. In January, before the pandemic hit, I would have put the odds of a Trump re-election at above 60% with the US unemployment rate at a 70 year low, US equity markets hitting new all-time highs, and the US securing an important trade deal with China. Then Covid hit and changed everything!

Trump’s handling of the pandemic has been subpar (those daily White House updates were train wrecks). Coupled with the deepest recession seen in decades and the most explosive racial tensions witnessed since the 1960s, it’s no wonder Trump is on his back heels and down in the polls.

Currently, the Real Clear Politics national poll has Biden leading by 8 points, which has increased in recent weeks following the debate, if you could call it that, and the huge news that Trump was infected with the virus last week.

Yes the polls got it dead wrong in 2016, so it’s by no means a lock for Biden, but that doesn’t mean the polls are destined to err this time.

One stat that should be very concerning to the Trump campaign is support of those over 65. In the 2016 election against Clinton, he won those voters by over 9%. Currently, Trump’s trailing by 21% based on a CNN poll and an even wider 27% from a recent NBC/Wall Street Journal poll. If this holds into Election Day, then this may end up costing Trump his second term. 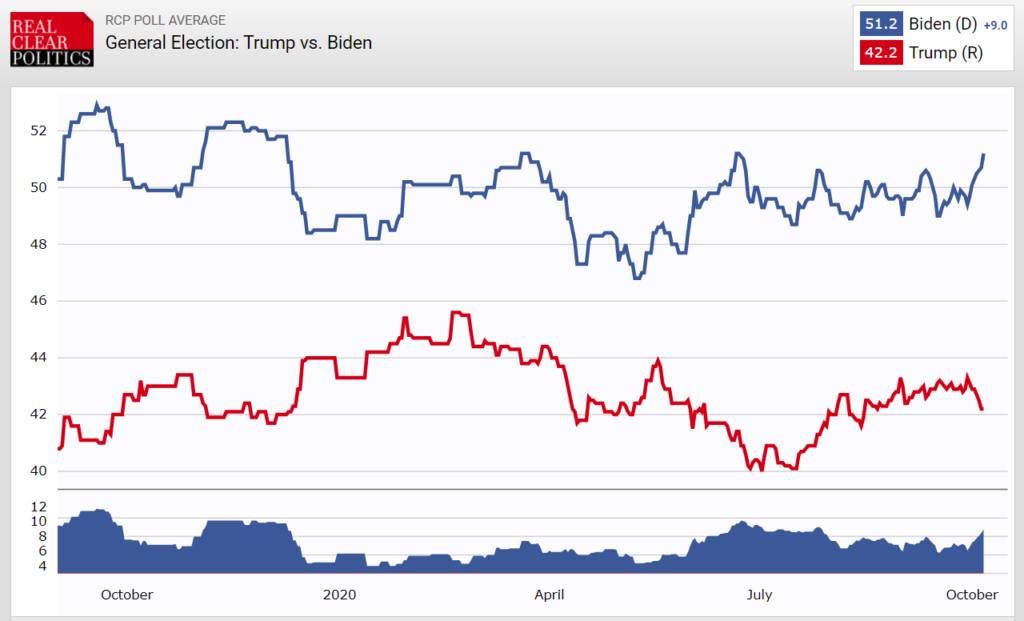 What has me most concerned is a potentially contested US election by President Trump. Numerous times when pressed by the media and reporters on whether he would accept the election results, Trump has responded with “we’ll see”. He’s made his position very clear that he believes there will be significant voter fraud in this election, potentially setting the stage for him to contest the results come November 3rd. And given we’ll likely see a record number of mail-in ballots due to the pandemic, we could be looking at weeks and potentially months before we have a confirmed winner.

Looking back on the Bush/Gore 2000 election, it took over a month for a Supreme Court ruling to determine the winner, with markets getting whacked during this period of uncertainty (the S&P 500 declined 8% over this period).

My hope is that there will be a clear winner come November 3rd and the losing candidate, whether it be Biden or Trump, recognize the importance of a peaceful transition to a well-functioning democracy and concedes, so that we can avoid this unnecessary and pointless period of uncertainty and likely short-term market weakness. 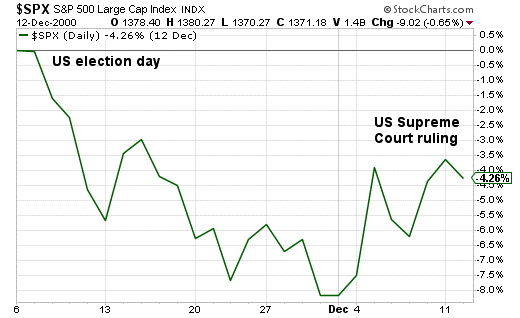 If markets do come under pressure I believe it will be short-lived and could prove to be a buying opportunity, as the Supreme Court would then get involved and clean up the mess. Let’s hope it doesn’t come to this!

Trump keeps saying and some believe that a Biden win would be catastrophic for the economy and stock market. I don’t buy this for a few reasons.

First, while the US President is important, the business cycle, interest rates and other macro factors are far more critical to the economy and stock market.

Second, if Biden does win and we potentially see a “blue wave”, there could be a larger stimulus plan and potentially higher growth. Both Goldman Sachs and Moody’s predict higher GDP and job growth under Biden’s economic plans compared to Trump’s current policies.

Third, contrary to common perception, the stock market has historically done better under a Democratic president. Below I provide the annual price change for the Dow Jones since 1990 under both a Republican and Democratic President. If I sum up each yearly return under every president, Democrat presidents have seen a higher 35% return to the Republican Presidents of 27%. But this isn’t the best way to look at returns. 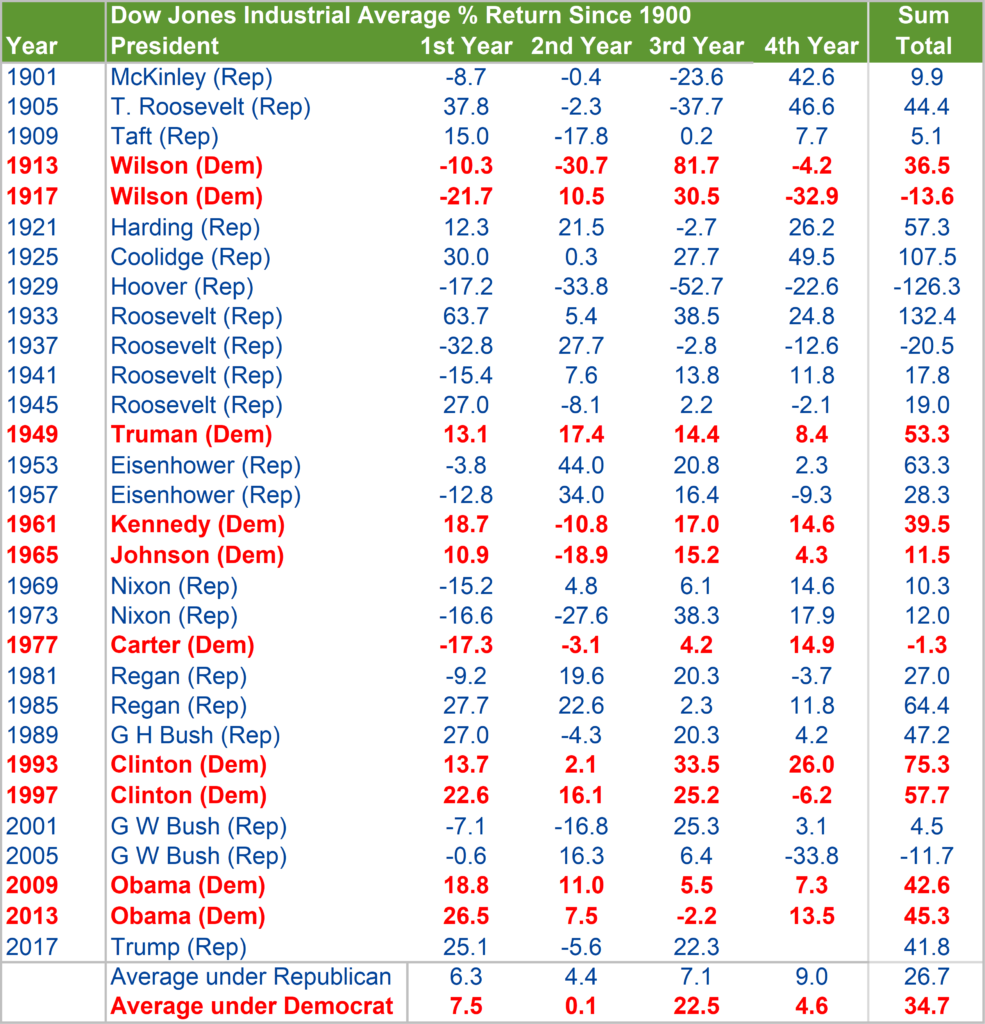 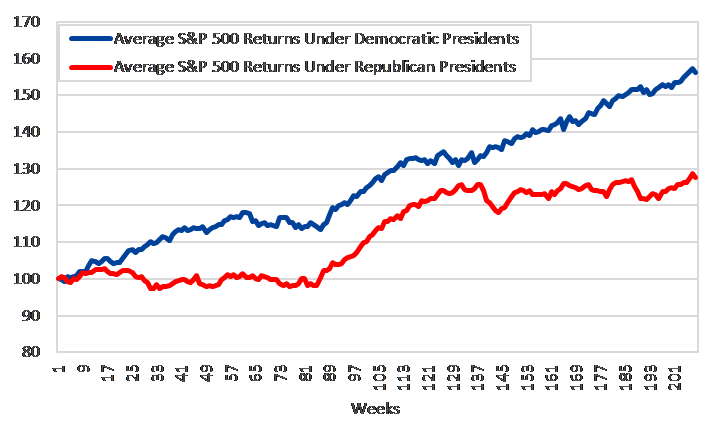 Source: Bloomberg, Turner Investments. Based on S&P 500 data from 1945 to present

So there you have it! In 25 days from now we’ll either have a second Trump term, or a new Democratic president who will basically reverse much of what Trump has done over the last 4 years. Some welcome this prospect with open arms while others want to see more Trump. Elections matter, and this one especially.