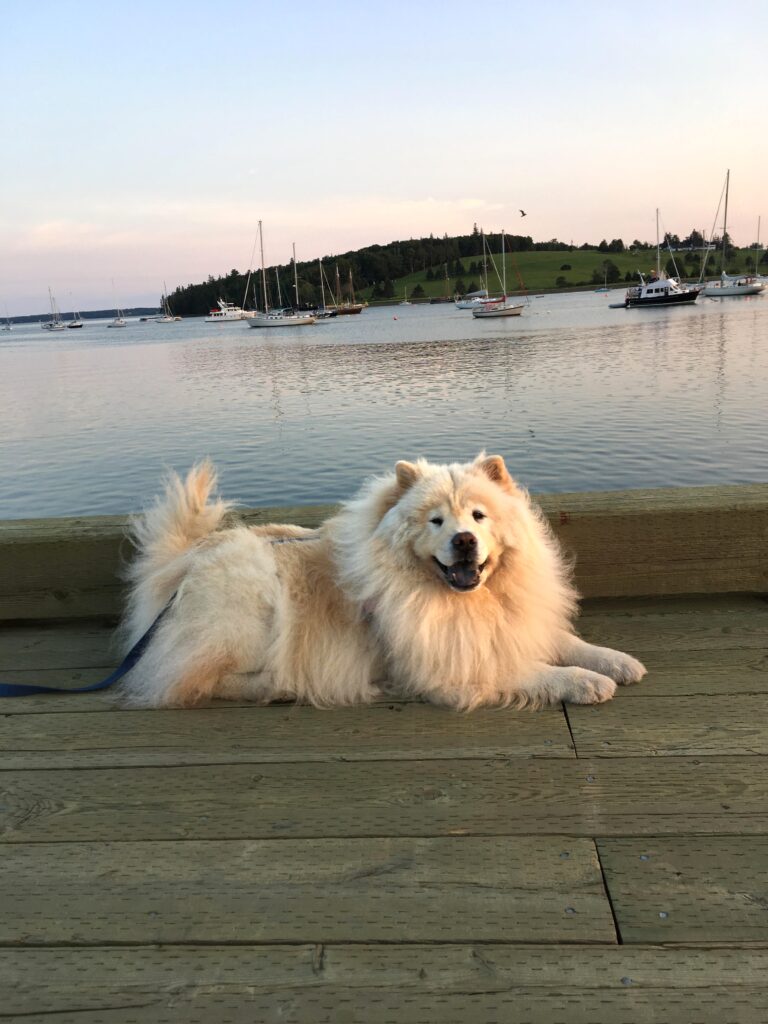 There was little doubt we needed each other. Badly. I’d recently lost my job and my identity. He had it worse. Abandoned, sores on his flanks, a cone of shame on his head and a shaved rump with a razored rat tail. Months in a cage. People came and left with cute puppies. He watched.

At the shelter our gaze met. Sad eyes. He turned away as if not wishing to be rejected again. I did not. I could not. Bandit came home with me, looking like a broken combat dog. That night he found the pulse and warmth of the dishwasher and tucked into it, wary of people.

He grew enough hair to defeat every vacuum cleaner ever invented. That abused body sprouted a lionesque mane, flowing feathers from his legs and a skirt any swirling Scott would die for. A purebred cream Chow, ancient and noble. Serene and aloof, showing affection in tiny, precious dollops. But always, the eyes of love felt upon my back.

Over thirteen years we lived in city, country, hamlet and town. On a farm. Above a store. In the urban core. For a while the only place to walk him was a downtown green space populated by street people, junkies, the troubled and destitute. The first day or two were terrifying, until this creature spent time smiling at those society didn’t want, letting soiled, punctured hands caress his coat.

All Chows, it turns out, know everything. So he walked me, set the route and duration and the treat rules. During the time we lived in a downtown hotel, all marble and fuss, he migrated to the lobby and held court. Weary travellers, yearning for their own pets, couldn’t stay away. One day I found him surrounded by the Russian national hockey team, all on their knees, looking like he was fluent.

For a spell we lived near a bar strip. At its beating heart was a dive where the servers wore wicked short shirts and plunging necklines. We’d walk by and the girls would flood out to the patio, bending over Bandit and stroking his fur. I swear he gave me a sly little glance, preening amid a sea of cleavage. Boys with their beers looked on in pure envy.

Speaking of the sea, in Lunenburg he loved it. Lobster gear on the wharf was inhaled, gangways trotted, otters ferreted and much time spent sitting with nose to the salt wind. By age 15 there was one spring-loaded knee, a bum foot and copious naps. But going out the door was still showtime. He knew how he looked. And he approved.

Just a dog, of course. Number seven for Dorothy and I. But the years together were so meaningful, so extended, so blessed. A gift.