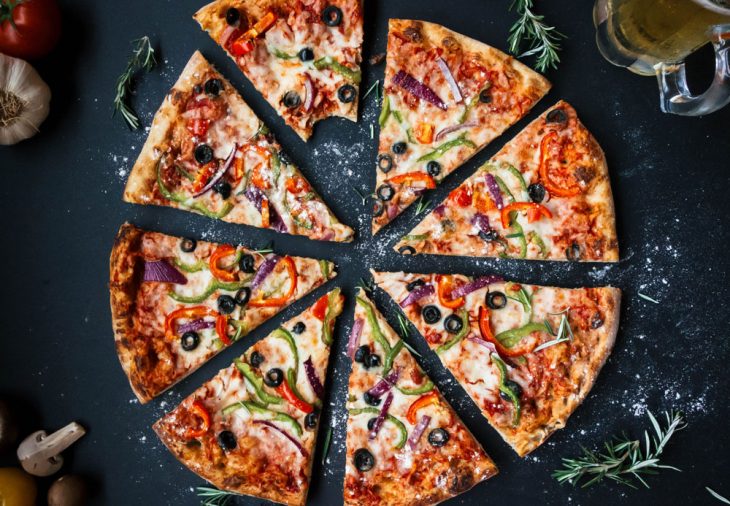 Thank god the US presidential election’s over.

Not because we now have a declared winner, but rather because I no longer have to suffer the endless TV network advertising loop. Tom Selleck hypnotically reassuring me about reverse mortgages, learning that mattresses can be like McDLTs—hot on one side, cold on the other, or watching grey-haired dudes pumped full of Ageless Male slinging kettle weights like balsa wood was becoming too painful to watch. But at least CNN and Fox News had one thing in common: a target demographic.

However, the other recurring ad that caught my attention during election night (or, as it turned out, election week) was one for Schwab Stock Slices. I have to confess, until I started watching the election coverage, I’d never heard of these products.

But a “slice” is simply a fractional share of some of the largest and best-known US companies: Netflix, Apple, McDonald’s, Amazon, Facebook, Alphabet (Google), Nike and so on. With Schwab you can buy as little as one fractional share or up to as many as 10 fractional shares. The service that Schwab provides, of course, is ease of ownership. On an absolute price-basis, many of these stocks are expensive. Amazon and Alphabet, for instance, currently trade at more than $3,000 and $1,700 per share, respectively. Fractional shares have become popular and are not unique to Charles Schwab. Many other firms, including Fidelity, Robinhood and Interactive Brokers, offer similar products.

Now making investing more accessible is not in and of itself a bad thing. But like Tom Selleck’s ad plugging reverse mortgages, you’re not getting the full story. “Slices” present concerns.

Second, fractional shares encourage more frequent trading, which is particularly problematic for inexperienced investors. And if you’re trading five-buck fractional shares because you can’t afford the full price of a single share, I would argue that you’re very likely an inexperienced investor. I’ve mentioned many times on this blog that frequent trading is a doomed approach to investing.

And finally, owning even the 10-company “slice”, while better than nothing, still doesn’t even come close to providing proper portfolio diversification.

When it comes to portfolio risk, there are two main types: systematic and unsystematic.

Systematic risk refers to the broad, overall events that, to varying degrees, take down all individual stocks. Systematic risk is often referred to as “market risk”. The 2008-09 financial crisis, 9/11, 1987’s Black Monday, 2011’s Japanese earthquake and tsunami or, more recently, Covid-19 are all examples of systematic risk: forces or events that will drive any stock lower regardless of its particular individual business model. There’s nothing a portfolio manager can do to diversify away systematic risk.

Unsystematic risk meanwhile, refers to company-specific risk. Unsystematic risk refers to the internal events that can crater a company’s fortunes. The fraud at Enron, the mismanagement at Nortel or the inability to adapt to changing technologies at BlackBerry are all examples of unsystematic risk. Fortunately, unsystematic risk can be diversified away. The difficulty, however, is that it takes an enormous number of individual stocks to do this. Roughly speaking, about 60 individual positions (see graphic below).

Proper diversification: it takes a lot 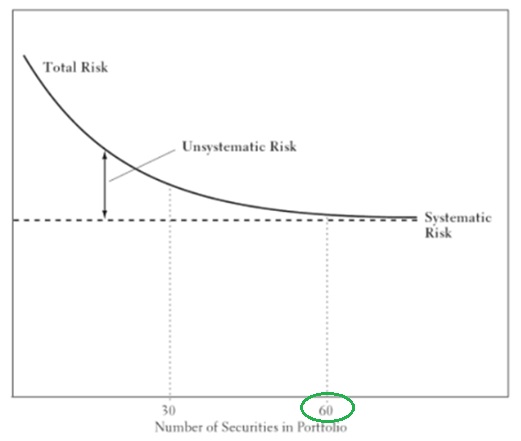 The further problem, of course, is the impossibility of having an informed, thoroughly researched, and ultimately accurate, outlook for 60 different stocks.

I worked many years on an institutional research desk and a hardworking research analyst might cover 10 or 15 different companies. And this analyst would be focused: working long hours studying the industry and company-specific fundamentals affecting their concentrated coverage list. But, in the end, and I can tell you this from witnessing it first hand, the accuracy of the analysts’ recommendations was inconsistent and often amounted to nothing more than a coin toss.

I presume my readers have regular jobs or at least busy lives, so imagine the impossibility of trying to successfully analyze not 10 stocks, but 60, and doing it with a fraction of the available time. However, building a portfolio with anything less than 60 stocks means taking on unsystematic risk. Schwab stock slices might appear to provide sufficient diversification, but they fall well short.

A concentrated portfolio can be devastated if even just a few of the positions collapse. And even if you hold what you perceive to be blue chips, which is how Schwab currently positions its “slices”, this will offer little protection if you hold too few positions. Remember: General Electric, Lehman Brothers, Bear Stearns, Nortel, Boeing, Nokia (the list goes on) either are, or were once, blue chips.

So it might be kind of neat to buy five or 10 blue-chip companies in a single transaction. But five or 10 fractional shares aren’t enough to properly control risk.

There are many ways to properly diversify a portfolio. A Schwab “slice” ain’t one of them.