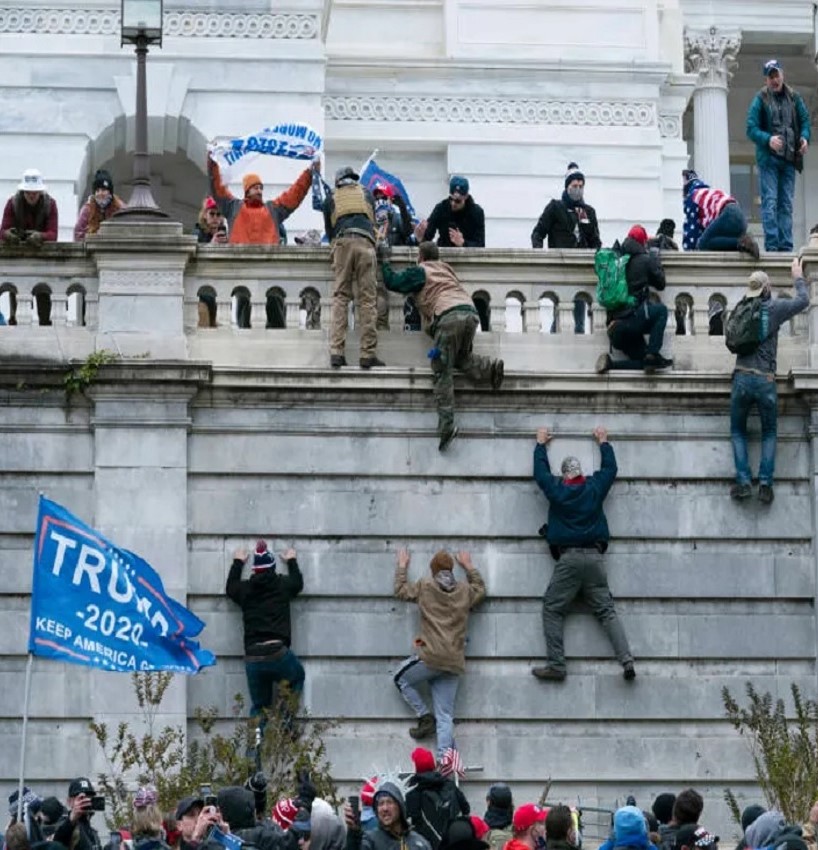 On Wednesday domestic terrorists laid siege to, penetrated and overtook the US capital. People died. Cops all over the place. Anarchy reigned. The last time Washington was assaulted was in 1814. And we did it.

Well, in the midst of this attempted coup of the American government, the stock market gained 400 points. Overnight it tacked on a bunch more. When it opened this morning, more surge.

Now, some people wonder… howcum? Are the money dudes on Wall Street completely tone deaf to the fact thousands of citizens stormed Congress and tried to overthrow it? How could this not have caused a market crash of Biblical proportions? And what the heck happens next? The guy who caused the mob is still in power, after all.

Here are some facts, and reasons investors watched the mob swarm over the seat of democracy and did not rush to cash. Instead they hit the big Buy button.

Yesterday’s events will have obliterated the brand value of “Trump”. No one will pay for the pleasure of using the name. That well has been poisoned. We read with interest that shareholders are starting to warn managements of making financial contributions to other Insurrectionist Republicans. What management will defy those wishes? Who will want to submit a proposal to hold their next AGM at Mar A Lago? There’s more than enough anger to go round.

After the bloody coup attempt, nobody who matters cares about the 45th president. He has no legacy. He cannot run in 2024. Ivanka, either. The millions who voted for him will dwindle, stray off, be repulsed or spend the next few years yelling at each other and the wall on Parler. Their influence on the economy or anything of consequence: zero.

Second, Trump has done a fine job of destroying a great political party. Republicans have been ripped apart after mindlessly serving a despot and mentally defective thug for the past four years. Shame on them. Now they need to retreat, regroup, refocus and try to restore trust. It will take time, during which Democrats will run free with their agenda.

Third, this week everything has changed. Trump lost the House, the White House and now the Senate. His phone call last weekend to Georgia officials, telling them to rig the vote count in his favour, helped seal the deal. Georgia voters on Tuesday sent two Dems to the Senate – an historic moment – and now the blues are in charge.

Fourth, this means Biden (affirmed last night after the attempted rebellion) can (a) goose vaxing and get the virus more under control – a pre-requisite to re-opening the economy, (b) pass a new stimulus package including healthy relief cheques to citizens and (c) govern in a fashion more predictable, consistent and efficient than that experienced in the last four years. Yes, corporate taxes may go up but no longer will there be policy announcements, out of the blue, in a midnight tweet WRITTEN IN CAPS!!

What has this meant?

Bond yields have spiked with the 10-year Treasury rate coursing through 1%, and expected to hit 1.25%. That is huge. It might bulge much more, on the expectation of romping GDP growth of as much as 6%. Or more. The third and fourth quarters of 2021 could be a rush.

The Dow and the S&P are in record territory as a result. So is Bay Street. Real estate is smoking in both the US and Canada (GTA sales up 65%, Van sales up 54%). Car sales are exploding. Check out the price of a two-by-four or a hunk of G1S plywood. This is raw inflation. The Biden presidency – at least in the first year or two – will be all about spending, stimulus, infrastructure and virus defeat. There may be a large amount of upside to the markets, along with the certainty of swelling consumer prices and rising interest rates a lot sooner than most people expected.

So this is why.

The cancer has been removed. Carved out in a few hours on January the 6th. The body survived it.

So in the midst of this tough winter of disease, lockdowns, quarantines, isolation, cold, conspiracy and now rebellion, recovery looks certain. We have the meds. We have the political will. We’ve had a catharsis. And we’re all so damn sick of drama.

Maybe we can even make a few things great again.